‘She was famous, too, as a sort of glamorous defective. Violet said it made her mad as hell, the way Violet got painted: blouse glossy and voluminous, like a gorgeous thing, but that she’d set this to rights, so we could hear her voice too. And I remembered: somewhere in Paris I saw a little copy of this painting of a fine woman. Blanche, on display – and even then, I understood the anger in myself that would be nursed by Violet. There she was, so pretty, buxom and velveteen, not all skew-eyed and jutting jaw like me. But she was not free: she was a subject and she was an object.’ (From Saving Lucia, chapter four, as all quotations.)

There is a painting of a woman called Blanche Wittmann by Brouillet. It’s called ‘A Clinical Lesson at the Salpêtrière’ (1887) and represents an imaginary scene of a contemporary scientific demonstration, based on real life, depicting the eminent French neurologist Jean-Martin Charcot (1825-1893) delivering a clinical lecture and demonstration at the Pitié-Salpêtrière Hospital in Paris. Blanche, the hysteric in question, is a woman alone in a room full of men and she is both subject and object. I am very uncomfortable looking at this painting and draw on this in Saving Lucia.

Charcot was the foremost neurologist of late nineteenth-century France and has been called, the ‘Napoleon of the neuroses.’ His work greatly influenced the developing fields of neurology and psychology; modern psychiatry owes much to the work of Charcot and his direct followers. He was in charge of the Salpêtrière, then an asylum for those who were considered mentally ill; for hysterics. For most of Blanche’s adult life, the hospital was her home. It seems that she died there too, but we do not know where she is buried. She is at once entirely known and unknown. In the late nineteenth century, there were over eight thousand women at the Salpêtrière, and many remained there for life; post-mortem, Monsieur Charcot dissected their brains looking for discernible organic causes such as lesions. He found none. He had initially believed that hysteria was a neurological disorder for which patients were predisposed by hereditary features of their nervous system, but near the end of his life he concluded that hysteria was a psychological disease and the dissections stopped.

Monsieur Brouillet came to paint me; I was quite the thing against the stygian black of the doctors, don’t you think? The tendrils of my hair escaping down my neck. I had poise and gravitas in the pictures: he did not paint the days I crawled and slavered like a dog from la grande hystérie 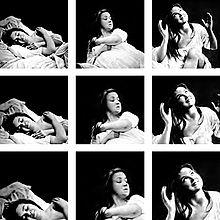 Let me tell you a little more about what we know. Marie ‘Blanche’ Wittmann lived between 1859 (possibly) and 1903 (possibly). I have written Marie as her birth name, but in going over what records there are, there appears to have been some doubt about her name and its spelling. Blanche was, however, the name she held during the famous sessions at the Salpêtrière, Paris. Blanche was known as the ‘Queen of the Hysterics’ and, while being treated at the hospital, Charcot used her as one of his ‘hysterics’ to demonstrate the effects of hypnosis. He would also apply magnets to her body and ovarian compression, both of which he believed would work on hysteria, operative upon the nerves. Freud was much influenced by the work of Charcot and observed his work, although he came earlier to different conclusions about the causes of hysteria, attributing them instead to psychiatric causes.

Hysteria grew and grew under his hands. Do you suppose that he had created it? I worry that I helped. Made madness into a show and circus or made hysteria more, forgive me, more hysterical. When he died, it stopped. I did not think of it anymore and, obviously, neither did he.

It is my understanding that Blanche never left the Salpêtrière, but it appears that she went on to work in a radiology laboratory there while, not far away, Marie Curie carried out her pioneering work. As I researched Saving Lucia, I saw that fictional elements invented by Per Olov Enquist in The Story of Blanche and Marie were assumed to be true, by reviewers and in factual pieces upon her. Enquist makes Blanche Charcot’s lover but also turns her into Curie’s assistant and later her confidant when Curie’s husband, Pierre, is killed; he shows Blanche as having lost both legs and an arm during their work on pitchblende, continuing her work, moving about as a torso on a purpose-made trolley and gives us Blanche’s notebooks: yellow, black and red and all three encased in a brown envelope marked ‘Book of Questions,’ fascinating insight into her life and work, with Curie and Charcot. But these are fictional things. He tells you it is fiction and going through records, articles—even a more recent riposte published by a neurologist in ‘The Lancet’—gives us a clearer picture. That a gripping fiction would so readily be assumed as fact is interesting. Some might argue shaming. Was she not already fascinating enough? This much is alluded to in Saving Lucia. But please, although I include much that is real, do not assume my historical fiction all to be true, because that desecrates the memory of a real person: a person I found captivating and sought to know and respect.

I wonder if, in years to come, ideas and imaginings will be written down as facts and what I did not intend or become will be transfigured into untruth.

At the Salpêtrière, Charcot had kept a vast number of photographs of patients; he also had a lasting visual record of Blanche, in Brouillet’s painting, with Blanche providing an arresting, even glamorous figure, under the mesmerism of Charcot. She is quite the spectacle, isn’t she? But so are the myriad other women captured in photographs (Blanche was also photographed.). When I first saw those photographs and when I think of the huge asylums of times past, it makes me tremble. Ah, I have been mad, not known what time of day it was or where my feet were; whose hands I was looking at or where my fingers ended. I have felt, again, tremors at night, flashbacks of shimmering visceral beauty that were death and horror to me. I have been a case; I have been treated abruptly and called indulgent; reduced to a cipher, a composite of only other people’s opinions of me, instilled in childhood when I was aberrant, an eldritch child. I have been picked up from the floor by brilliant and diligent hands and I have been cured as best I can be by a brilliant psychologist in our NHS, helped by an attentive and determined GP. But I will never be entirely free of the results of trauma, so it is that when I see, really try to see, the women in Saving Lucia; when I see the painting of Blanche and the photographs of her and the other hysterics in Charcot’s great collection, I do not see a case or even an oddity. I just meet the eyes of another woman and I want to sit with her and say, ‘Tell me about you. May I tell you about me?’ And, as for Blanche, Queen of the Hysterics (after Hippolyte, who escaped and that is another story and a point of delicious queer interest in the book), I would want to do the same, to ask her if she were complicit in what Charcot put on, once a week, and which is depicted  in the Brouillet painting; if she said yes, I would have said, ‘Well of course. You are a survivor.’ If no, we would perhaps have talked; thought how to disapprove or abrogate her hysterical responsibilities. How I might be accomplice…

Either way, I would have cleared the room of all those men.

I was a spectacle, a fine thing, under hypnosis. I convulsed, I calmed, rattled and shook at each cue…In years to come, what will they think of this? Am I a gimcrack show; a performer? What then, will they know about the workings of our minds and bodies?

…Everything else is the narrative you made for me and not my own legend. The one you accepted for me, not I.