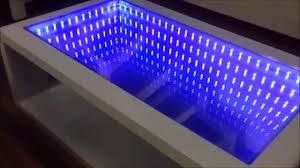 ON MENTORING
IT IS POSSIBLE YOU MAY NEED A HANKIE. I am writing quite specifically about one of my three boys; he’s thirteen.

I want to tell you about something which happened a couple of days ago to my middle boy. He likes to make things. Anyway, he’s started making an infinity table in his Man Shed. Here, above, is a photo of what an infinity table is; cool, innit? This is not his, but similar to the one he’s making, with colour change and fade from LED lights.

Anyway, I took him to see the very jolly men who run a glass cutting and fitting shop in a nearby town and they were awesome. I’d already talked to the lad about how there was brilliance and skill everywhere; links to make; you know how I go on about communities, too. Anyway. They talked and joked with him; did not talk down to him; chatted over the project; rang a friend up and got him to price the coloured film lad will need as glass overlay so the table has depth. They were warm and kind and funny.

They mostly ignored me, save for the occasional knowing wink. Spot on.

Then they cut the glass (which he enjoyed seeing) and lad told them this was not a school project; he just liked making things. And didn’t like school. They asked him to bring the finished item back to show them and, if he wanted, to stick business cards (‘Easy to make, lad’) up there in the shop – or maybe photos and they can say, ‘Yes we know someone who makes those.’ They then suggested a making price and selling price and reassured lad that this was business, pure and simple. ‘This is what you do, son. That’s how it all starts.’ I could tell he was listening, rapt, because it’s all very well mum rabbiting on about things, but our young don’t need to hear it from their primary carers (though that helps); they need to see things in action and have conversations with others in their communities. And sometimes their aspirations are killed off. It’s true. We have to so careful.

Lad hesitated about the notion of taking in a table to show them. They saw, ‘No, only if you want to, but you keep in touch and tell us how you get on.’

‘But my first table might not be any good’ says lad.

‘Of course it won’t be, son. That’s BECAUSE it’s your first one.’

They wouldn’t charge for the glass either. So I’m taking them cake and treats and a card, BECAUSE my boy LIT UP. He totally LIT UP. Because of the encouragement and because it was cool and kind of exciting. This is mentoring and it is priceless. It’s also everywhere and I do believe that. And it need not be extended, but perhaps a few meaningful encounters in which someone feels valued and that there are possibilities which they can extend with just a bit of guidance.

Now, lad is dyslexic. Yeah, lots of people are. But it makes school that bit harder; boring and tiring. What is more, I have listened to several conversations  – and I will leave the provenance unstated but should emphasise that I am not only focused on what is said in school but also in families – about how those are bright must go to university. This is what ‘doing well’ means. My hackles go up with that. As they do when my lad has been lectured about he can overcome his dyslexia and ‘go to a good university.’  I winced, too, when his older brother, my eldest boy, was recently told that there were only two jobs he’d be able to do with his A level choices. Yeah, right: like the world is not plural and various and with all kinds of jobs that exist even if you lack the vision or knowledge to imagine them. Yes, it’s tough, but get out there, talk to people. I will write more on this theme another day! I absolutely believe that going to university is not the only mark of brilliance; going to university may not a clever businessman make. Going to university does not necessarily endow you with the kindness and compassion that might transform the lives of others. I went to two – yeah, Oxbridge and Russel Group – but I don’t figure that this gives me intellectual dominion over someone else or that I am cleverer than they are: lots of thick people go to Oxford and Cambridge. AND OVER MY DEAD BODY will I hear a young person measure their worth against whether they go to university or not or be told (as I heard lad getting told) that ‘he will find his own place’ before another young person was turned to and praised for their cleverness.

What a narrow way to think or to imagine intelligence.

Then, what intelligence to lead my child forward with clear sight and kindness; with compassion.

So anyway, I was thinking that if your offspring is bored or demoralised by school, look within it – and to support staff as well as teaching staff – and look beyond it in your communities for mentoring, for people who inspire and listen to your child and who are not limited in their view of the world; who do not give advice which depresses the child or young person based on that.

We had THE BEST example of mentoring that afternoon. Mentoring is about kindness, about listening and also about being flexible – and smart – in your view of the world and in how you regard the views, aspirations and ideas of children and young people. And (my background is in teaching and a portfolio of volunteer posts as well as writing) they will teach you things too.

Here: this is the project before the infinity table. A home-made tubulum (plumbing bits and salvaged wood), played with my flip flops. Something cheery for you!