It is early days for Killing Hapless Ally. Which is a strange feeling as I am already working on at least one other book. I am both letting her go and keeping an eye on her, and writing pieces on mental health, anxiety, literature and well-being, young people and mental health and parenting and mental health. You can access any of these through the pages of this blog, linked at top, or read some of them as blog posts here. I notice that even when I write on more frivolous topics – such as in my posts for http://www.selfishmother.com – I am also mindful of the topic of mental health. I have so much more to say here, I think.

Anyway, I liked today’s review of Killing Hapless Ally. It’s nicely written, isn’t it? That ‘So’ had me at hello.Here we are:

‘So. I suggest you don’t try to approach this as a book to dip into, in the few minutes before sleep for instance. The early chapters are a roller coaster of happenings expressed in dense, layered prose full of wit and horror. They are gripping and challenging at the same time, and the style cleverly reflects the state of the young Alison’s mind as she tries to cope with her family. It almost feels like the literary pizazz and black humour is there to deflect the tale of such cruelty to a child. When we get to the adult Alison’s showdown with her demons, and her work with Drs Hook and Crook, the style becomes calmer as Alison’s voice takes over. This packs even more of a punch when describing the dispatching of the chorus of Hapless Ally, Dead Santa Maria, Brother who Might as Well have been Dead, Vaguely Dead Dad and her other demons. This dispatching is incredibly moving, as is the knowledge that Alison’s voice, spirit and fierce intelligence was not dimmed despite everyone’s best efforts including her own. Highly, highly recommended.’

What am I reading? I am about to write a review of The Loney and A Girl is a Half-formed Thing, about which I have conflicting views, but both of which interested me greatly. I thought, for example, that the language of the former was utterly beautiful; its evocation of landscape is something that will stay with me for a long time. I also felt it pulled off the difficult feat of making one laugh at the very time one is unsettled by the prose and full of dread. The latter, I am torn by. I am a huge fan of both Beckett and Joyce and instinctively felt at home here and yet…More to come. On my bedside table at the moment, Playthings by Alex Pheby, which is, I am convinced, entirely brilliant. Again review to come, when I get time. I do want to say, though, that all three of these fascinating titles found their home (at least initially) with small presses. May I remind you of my article on publishing with a small press myself. Here:

A Small Press State of Mind

And what with Alex Pheby’s book by my bed (and some rather ravishing other things to come from Galley Beggar Press) and most of my way through the whole Wellcome prize list, I want to recommend to you Suzanne O’ Sullivan’s It’s All In Your Head: True Stories of Imaginary Illness. She is a neurologist and has a deep interest in and respect for psychosomatic illness, which I should add is not ‘imagined’ as in ‘faked’, but a gamut of really experienced physical symptoms which, it is argued, may have their root in psychological issues. That does not under-value their reality, the pain these things cause or the havoc they wreak in people’s lives.

I felt that O’Sullivan is elucidating in what seems to me a very sensitive way the subtle link between the mind and the body. I can see from some of the negative (some furiously so) reviews on Amazon that many people have taken her to task, accusing her of misunderstanding illness for which, at the end of the day, it is hard or impossible to attribute physical cause, but I also have some personal understanding of this, in that, as someone who received mental health support and who had many years of struggling with anxiety, depression and OCD, I also had a raft of  (physically) unexplained medical problems alongside them: pain, awful fatigue and IBS to name three. Now I am mentally much stronger, because – and it would have been different otherwise: I cannot emphasise this enough – I have been helped to find the tools for health by appropriate MHRS support and I had to choose to engage with that support. And my physical health is very different. When it wavers, as it must do, both my psychological and physical responses are very different.  I would have to posit, therefore, that these things – the pain, IBS and fatigue – were, for me,  quite possibly psychosomatic and rooted in the psychological distress I was experiencing. I do feel uncomfortable stating this, but thus was my experience: pain came from pain; illness came from sadness – a fruit of what, in other times, might have been called hysteria or melancholia. It is this same inference on which some of those Amazon reviewers have taken her to task because they feel it is a misunderstanding of subtle illness.

I know that it is not easy for people and that shifting illness for which there is no attributable cause (which is not the same as saying there isn’t a cause which needs treatment or that the illness is not real to its sufferer or that it isn’t a serious matter) does not receive the compassion it should in the everyday world, so that those who suffer from something which may, by some definitions, be termed psychosomatic, also have to cope with others’ lack of understanding and sympathy. I am afraid it is also thus with mental health disorders and I certainly felt stigmatised within society and even within my own family; people still do – and that’s partly why I wrote my novel. No-one should feel both ill and persecuted and I wanted to punch stigma roundly on the nose. So, I did find much of what O’Sullivan wrote resonated with me – particularly its thornier or more uncomfortable points – because I also knew that I could, at several stages, have accepted further medical and/or psychiatric intervention which, on paper, was not essential. It is for serious illness – mental illness, I mean (and you see I am pains to point out that I am speaking only of myself because mental health problems are complex, diverse and peculiar to the individual) but I was encouraged to see I had the answers and, of course, I had my Dorothy Rowe books beside me. Her line – also not popular with all – is that depression is a prison where you are both prisoner and jailer; ergo, you put yourself in there and you have the key to getting yourself out. Human beings have the most extraordinary resources and we should never forget that.

I will take some weeks to digest the book and I urge you to read it. I hope that the tone of my comments comes across well. 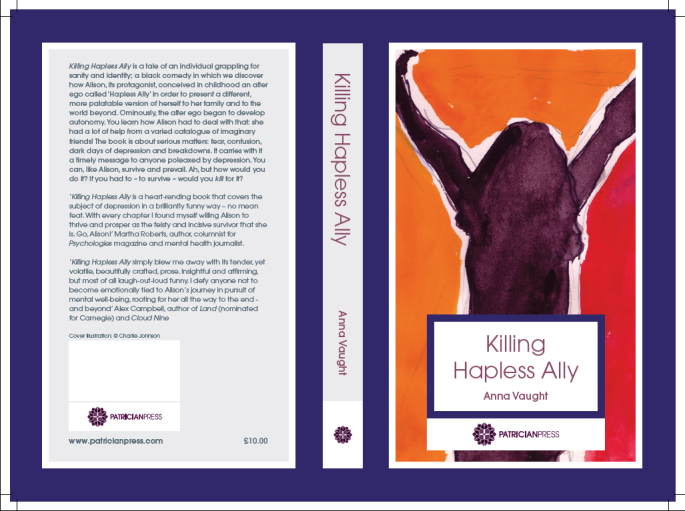 I was just re-reading a few of the Goodreads reviews for Killing Hapless Ally. I did have my first negative review (well, a three star, accompanied only with the brief comment that the reader got muddled and couldn’t understand it – and I do see that it will have its detractors). Also this week, the book was entered for the 2016 Goldsmith’s prize  – lookee here: http://www.gold.ac.uk/goldsmiths-prize/ , I did a spot of blogging for http://www.selfishmother.com and wrote a guest feature that will go here: http://thecontemporarysmallpress.com/

*I have now read this wonderful book, and think it so brave, true and moving, superbly written and brilliantly funny! Thank you for such courage.

*Wow! This book is incredible.

*I identified with Alison so quickly, I frightened myself. (Mind you, what sort of mother tells their child she was a mistake?) This novel felt like going through psychotherapy. Alison’s struggle out from the depths of depression is here written so beautifully, so intricately, so real. The streams of consciousness left me breathless and the letters written by Alison have inspired me. I am going to write my way through the depths and endure. I rejoice in Alison’s survival.

*This was worth reading. It is a powerful book that gives you a peek behind the mask into a private struggle, a concealed personal experience of being someone who lives with overwhelming levels of shame and self-contempt. We use these terms a lot but in this case it is a military grade phenomenon with significant consequences. So what happens when some-one is really unwanted, really unloved and learns to assume that if some-one else knew them, they would hurt them, reject them. This is what Alison has to live with and this is her story. How she manages to survive and how when the real world becomes unbearable, there are other places to go with other people in them. It’s a demanding book, not an easy read and you have to concentrate, but it’s worth it. The content can be upsetting, the madness difficult to keep up with, but that’s the point. I’ve read loads of accounts of this kind of thing, but rarely is the author up to the task of telling a good story and keeping it up through the whole book. Anna Vaught, the author, is bold and honest. She respects the reader and doesn’t try to protect you so at times you have to put the book down and take a break, but not for long as it is a page turner and you want to know how it turns out. It’s not easy to live with this kind of stuff, the professional help has its limits and it’s a test, but you come away from the book with hope and a belief that although some people can be cruel, not everyone is and sustained kindness can really help.

*Anna Vaught’s debut novel takes us on the helter-skelter ride that is the making of Alison, a seemingly ordinary girl, growing up in ordinary village in an unsuspected, undetected ordinary family. The book spins in ever-increasing circles, starting with the very young Alison, clever, loving and seeking to be lovable, struggling to make sense of the chronic pain she feels from believing she causes others’ pain. That struggle, delivered with humour, much literary wit and visceral determination, forms the book.
Vaught gives us much more than a glimpse into the world of mental illness; how it festers in the least suspected settings, how it can taint even the most brilliant, funny and promising minds and how much strength, inward and outward, is needed for recovery. Through Alison’s misadventures we laugh, often, as she shares with us her many heroes, both imaginary and real, and are prompted to consider the ordinary heroes in our own lives. For Alison’s heroes are the thread which pulls her story together: the sexy poets and popstars, the mums bearing lemon drizzles and cleaning products, the NHS angels who wear expensive-casual to work in vomit-coloured rooms.

Alison declares, after recalling her grandfather’s recitations that ‘…here’s the thing: words can heal. They can make you soar, whether read or heard. And you cannot take them away once brought into the world. Sometimes, they are good even if a bad person said them: because the words can exist independently of the mouth that uttered them or the horrid geography that spawned them. It is magic.